A Republic of Books

With a narrator not so much unreliable as imperfect, A Republic of Books might be a first refuge for scoundrels and saints. The perfect bookshop might not exist, but then again . . . a nation of books would have to be a republic as much as a state of mind.

An opinionated and iconoclastic bookseller, who has managed to live his life on his own terms for forty years while writing books about the things he values most and conducting a sui generis repository of what might be the best of literature, must come to terms at last with an America that has replaced the first amendment with political correctness.

Though bookseller Michael James McGeraughty lives his life in something less than an existential world of better words and deeds, the FBI believes he is harboring revolutionaries, the IRS thinks his business practices are questionable, the City of Boston is citing numerous code violations, even as his ex-wife wants him to close so she can sell the building. While his children have long since escaped to live their own lives, and his libertarian opinions have made him enemies as well as faithful customers, a jaded and pragmatic reporter writing a story about yet another bookshop closing is finding herself drawn to his idealism.

A Republic of Books is a novel of ideas. 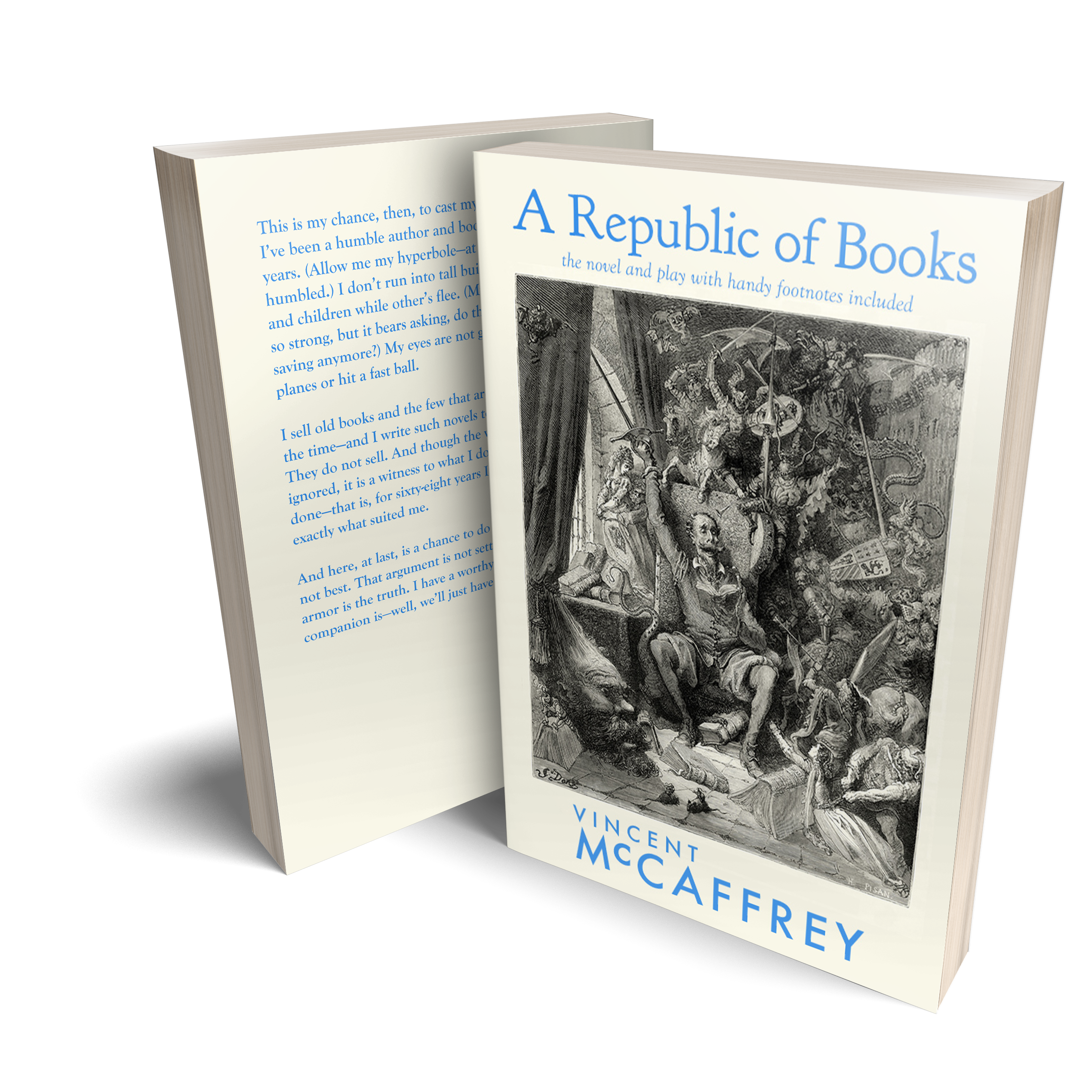 “McCaffrey is never cloying or playing to demographic. He’s just telling a compelling, old-school yarn, the kind of story a man who knows his literature tells.”

“Vincent McCaffrey is obviously a man so well read that he seems to have gleaned a deep understanding of human nature from his studies. His characters are appealing and sympathetic and his story well plotted. I look forward to his next novel after what was a most enjoyable debut.”

“McCaffrey has a gift for crafting quirky characters and original dialogue…”

A Hermit in the City

instead of a foreword

I had once purchased the library of a very poor man, Herman Levi. His wife had left him. His children too (for reasons I could only guess). And he died, I think, from lack of care. Levi lived in a small house on Cypress Street in Newton, and close to the Theological Seminary there. The building might once have been a stable or carriage house for an estate behind, but was now surrounded on all sides by twentieth century architectural detritus of the faux and stucco variety. And this house was truly filled with books. Kitchen shelves sagged with volumes. Ceiling beams slumped beneath makeshift bookcases in the rooms above. Floors visibly wallowed. Yet, after twenty years of bookselling in Boston, I had never met Herman because he bought all of his books at library sales. A matter of frugality, perhaps. Or, just as likely, a realization of the fact that there is a finer form of natural selection that takes place when librarians discard what is deemed insufficiently popular. And he had a wonderful eye. There was hardly a volume that was not worth the weight to carry, even with the heavy-handed branding of the library on spines, endpapers and title pages.

I would love to have known the man, and even yet feel the loss of our missed trajectories.

Because I was still married at the time and could then prevail upon my wife, who was also our landlord, for the indulgence, I was able to use the inconvenient corners of the connected garage next door to the shop to store my purchase. (All the prevailing took place in the midst of one of our epic arguments, as I recall.) In those triangular allotments of otherwise unusable space betwixt tires and fenders, I stacked over a thousand cardboard wine boxes filled with Herman Levi’s ex-library books. And it was thus that, and for more than three years afterward, I was able to set those carefully collected volumes out, box by box, on the sidewalk with the books priced at a dollar apiece. Each new lot brought the serious readers like flies, and our business flourished in that time from the added attention. And through his books, I did get to know the man a little, and thus to further regret our lack of acquaintance.

Herman Levi was a philosopher. His mistake was not in ridding himself of his Xanthippe or ignoring those misbegotten offspring whose minds had been hammered to lesser interests by a public-school system that abhors the irregular. The greater error of his ways was in failing to write things down. Amidst all those books marked here and there with hand torn scraps of yellowed newspaper, or shreds of junk mail circulars, I found nary a note or a letter.

After some months of browsing the collection as I set the volumes out, often taking some of the books home to see what he had marked, I came to appreciate his mind then too—and a bright idea came to mine. I went up to the Andover-Newton Seminary at the top of the hill behind the little tumble-down house and spoke to an old friend—an instructor there whom I will leave nameless so that he is not scourged by my acquaintance—and mentioned Levi’s name to him.

Yes! My friend knew ‘Levi,’ as the man liked to be called. They had “spent long hours arguing over pins and angels,” he said. I asked him about Levi’s character. My friend grew serious. There were personal matters involved that he was not free to discuss. But this was a truly lonely soul, he said.

In the midst of a city suburb, Herman Levi had tried to live the life of a hermit and failed. It was this failure that troubled my friend most, because Levi had been sure the fault was in himself, and my friend could not persuade him otherwise. My friend too regretted that Levi did not write, despite much prompting.