The rain had begun with little warning, announced only by a lift of old leaves from the trees closest to the road tossed skyward on invisible gusts and then a sudden darkening of the sun by the belly of a dark cloud just visible in the trough of road ahead. Within moments the windshield wipers had difficultly clearing the class and I slowed to a more reasonable crawl. A car behind immediately gave me a horn and then passed impatiently into the oncoming lane, forcing another car to stop.

Just ahead on my side a blue plastic sheet that appeared to be covering something stationary, parted at the middle where it was now obviously pulled over a backpack and a red beard and rain mottled glasses. A bare arm gestured at me with thumb wagging. I hit the blinkers and stopped.

The fellow slipped his pack off and opened the door, while rolling the water from the blue sheet as if he had practiced that move more than once, and tossing it to the floor of the cab along with his sleeping bag, he stepped up with the pack landing in his lap. He was not a small man in girth and the pack pressed against the dashboard. The beard was ridiculous. END_OF_DOCUMENT_TOKEN_TO_BE_REPLACED

[Part two, wherein Michael McGeraughty must face the music of the night.]

I have filled my little trailer with my books—what remains—and I have lit out for the territories the same as young Huck. I can roll up my sleeping bag and that slab of foam every morning and fit it neatly above the desk in what was once the perfect bunk for kids, a space above the trailer hitch that my own joints have ruled out the possibility of ever using. Below that I have my desk and a cooler for ice beneath. I cannot abide warm beer even in emergencies and I prefer not to see this desperate act as that—not quite yet. After all, it is just my tribute to Dylan Thomas. I will not go gentle into that good night.

I do not know if they’ve yet issued a warrant for my arrest back in Old Boston. I know I am certainly ‘on the lam’, as it were, because the judge ordered me to stay put. But then, given her salary, she does not need to worry about Boston prices. It is proving far cheaper to be on the road than I had hoped. Nevertheless, I understand that they will eventually find me. It’s not just the license plate. I’ve kept the name of the old shop ‘A Republic of Books’ on both doors of my truck. Hard to miss. END_OF_DOCUMENT_TOKEN_TO_BE_REPLACED

Part One of a new novel about Michael McGeraughty, proprietor of A Republic of Books, and how he lit out for the territories to see if his country was actually worth saving, or if the soul had left the body and the rot taken hold

[ Portions of this chapter were originally published at https://amgreatness.com/ ]

Two hundred and thirty-four years after Ben Franklin issued his warning on the occasion of its beginning, we couldn’t keep it.

The Republic is dead. To pretend otherwise after the government usurpations of authority in recent years would be delusional, which I certainly have been. I wanted to believe otherwise. But this state of affairs has been true at least since shortly after September 11, 2001, and the panicked passage of an unconstitutional Patriot Act and increased during the erstwhile war on terror, which has since been so terribly lost.

True, much of the public is unaware, “I didn’t even know it was sick,” they might say, preoccupied as they always are with earning a living and cleaning the gutters—but this is usually the case, until it isn’t. Remember, the farmers of New Jersey, prosperous and happy as they were, could not care less about the revolution in 1776 until the British troops in their New York winter quarters, began to forage for the necessary food for their horses and the forces of the American rebellion began working to deprive them of that necessary treat.

Before a dark age of technologically enhanced authoritarian rule descends—an age that I believe will not soon end—this brief time of passage must be taken as a last opportunity to recover our lost liberty. But what can the minority who are aware of their loss do? Certainly, any attempt at forcing the issue through violent revolution would only deepen the tragedy and coalesce support of the majority around the status quo. What then, can be done? END_OF_DOCUMENT_TOKEN_TO_BE_REPLACED 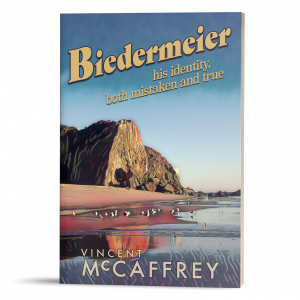 Biedermeier: his identity, both mistaken and true is now available in paperback and Kindle from the great and powerful Amazon.

From the back cover:

Otto Biedermeier, the Hollywood icon and B-movie legend, was murdered by his wife, Mysterious Circumstances. Tom Lenz, a film historian and the director’s biographer, wants to update his 20-year-old monograph as well as to pay his respects.

After meeting again with Ms. Circumstances, a former circus performer whose specialty of magic tricks on the high wire had made her briefly famous before capturing the heart of the filmmaker, Tom Lenz has his doubts.

Once, I had asked,“Why? Does it matter? No one seems to care. People apparently want to be lied to. That’s what politics is. That’s why they go to the movies, isn’t it?”

Otto was firm in his answer. “Truth matters. You have to look for it. What our children know is our only legacy. That’s why I make my movies.”

I don’t know many libertarians. There aren’t a lot to know out here in the boondocks. Mostly it’s the same mix of people I knew in Boston, just fewer of them. And even the few libertarians I am aware of locally are not given to too much conversation. They are well used to the common responses when confronted with matters of government and individual responsibility.

“But you can’t leave a decision like that up to the average person. They might do anything!”

The fact that the government they rely on is made up of average people, both good and bad, who are by nature self-interested, are easily corrupted by power and greed, and faced with an emergency, usually make the wrong decision, never seems to dissuade many from this preference, no matter the trail of tears and wreckage left behind. END_OF_DOCUMENT_TOKEN_TO_BE_REPLACED

About William McGuire and other unexpected stories

The original plan, as plans often do, went awry. Two of the stories I had hoped to include with the print edition of the novella, I Am William McGuire, did not work out as hoped. Most of the shorter material I write is intended as backgound or continuity for novels–stories within the story–and one of those novels, A Young Man From Mars, is one of the oldest of the unpublished works precisely because the internal stories that make it whole are not yet satisfactory to me. I have made the point elsewhere that I believe the novel is best when it reflects the whole of a human life, and that plot should be a natural outgrowth of a life and the way it is lived, or of several lives, and not superimposed. Each of us is a creature of a plot of our own making. What we are born with and the accidents that befall us are only the raw material. How we choose to deal with or avoid those motivations is our story.

The two novellas, I Am William McGuire and If Blood Were Orange, were written originally as screenplays, but as time passed and I began to accept the fact that I would never be able to see them finished that way, I completed them instead as they are now. She Knows Her Onions was a story I took out of The Dark Heart of Night to keep the book a more reasonable length. That Little Old Lady and Me was intended as a part of John Finn but in the end I thought unnecessary to that effort, though still fun, in and of itself. Seely’s Surfside is a key moment from a novel that will never be completed for other more complicated reasons.

In any case, these stories, long on my website, are now available in print through the Great and Mighty Amazon at https://www.amazon.com/William-McGuire-other-unexpected-stories/dp/0989790363/ref=sr_1_1?dchild=1&keywords=I+Am+William+McGuire&qid=1600286701&s=books&sr=1-1